Lindsey and I spent the day at the apartment. I had intended to go down to the studio but I decided to have some time with my girlfriend where I wasn't worrying about work for a little while. We had breakfast at a kind-of-divey place down the street that we like to go to (mostly because of location.) 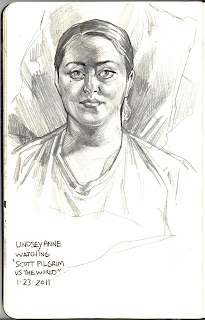 Upon our return home I worked on what was supposed to have been Friday's update for White Pony and then I did a little sketch of Lindsey while she watched (and I listened to) Scott Pilgrim Vs. The World. We just played a game of Bananagrams and I lost again (I'm on a historic losing streak.) I'm kind of a poor sport but I try to make up for that by being a good boyfriend the rest of the time.

See you soon!
Posted by SpiderBridge at 9:38 PM