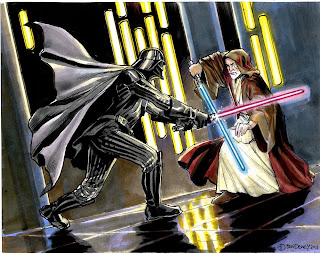 I Love Star Wars (the original theatrical cut of the first three movies) to an insane degree. For how I feel about the subsequent 'prequels' look no further than this review.

I found out what it means to be "the learner" while trying to draw a sword fight once again. If you want to challenge yourself as an artist try some takes on someone running super fast and/or attempt to convey the struggle of two people crossing blades. It's always harder than I think it's going to be.

In my mind this was supposed to be a little doodle for the blog. I wanted it to be energetic and spontaneous looking along the lines of Eric Canete but in the end it just looks like me (which I suppose is fitting because Canete himself told me not to mimic anyone.) 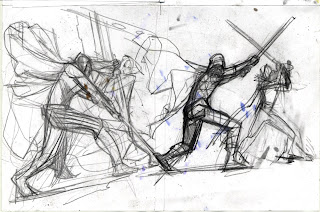 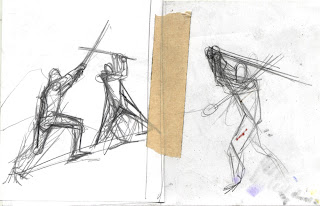 Here are a few sketches I did before hand. It doesn't much resemble any of them. This is partly because I screwed up the hand position on the lightsaber when I was drawing Obi Wan. According to Darkhorse comics (and I think Lucasfilm too) all Jedi are right handed. I didn't want to commit a blunder so I just made Ben block Vader's blow with a one handed grip. My friend David pointed out that it still looks more exciting than the original showdown so I suppose I feel okay about how it turned out!
Posted by SpiderBridge at 8:00 AM