Paul Gilbert has been my favorite electric guitar player since I 'discovered' his brilliant playing in 2008. Anyone who has spoken to me for an hour or more, since that time, can attest to this. 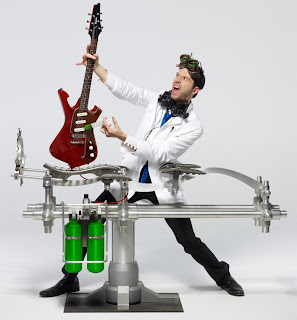 Paul demonstrates the science of rocking out

Paul describes the pickups in my next guitar
He is best known from his tenure in a band called Mr. Big that peaked at the same time that grunge was on the ascent and, thus, was considered uncool. You may notice that those bands, as cool as they were, did not stand the test of time. Mr. Big has returned with all the giddy over the top spectacle that characterized the era in which they first emerged and I for one am glad because we need some of that gleeful grandeur in these times of silly reality T.V. and unexceptional celebrities.


How can you not love that chorus riff and face melting solo?

Yes! Tapping intro. Haters to the left- as they say
So I know this isn't a comics/art post but every now and then it's important to engage with something other than drawing to keep the batteries charged and my mind open to new possibilities. I hit a wall yesterday after working for 12 hours and Mr. Big was just the sort of sunshine I was looking for.
Posted by SpiderBridge at 11:38 AM