A while back Periscope studio decided to start a sketch tumblr and one of our early topics was "Mad Men." I like the look of the show and I enjoy the themes they explore in the series (culture clash, sexual politics, doomed chauvinism, identity, creativity, etc.) I decided to draw the most beautiful people in the cast and tried to pull my color choices from actual frames of the show. 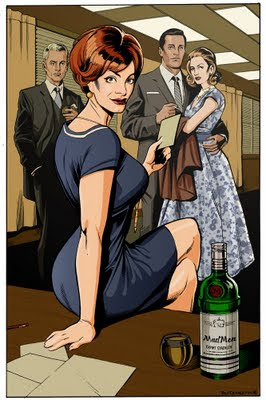 I'm thankful that a woman with Ms. Hendricks' curves is considered 'hot' by the rest of you too now. I've been saying it for years;ask Lindsey.
I used a lot of little pictures to help including some posed for by my friend and fellow Periscoper, artist Erika Moen. I wanted a lady to stand in for Joan and Betty.

Having friends who will pose for you is great because it really allows you to determine what sort of compositional choices are realistic in real time. You need not rely on stock Internet photos or your imagination alone. Sketch out you idea and then pose it; it is like scientific verification!
Here are the inks if you are curious. Joan/Christina's mouth is a little too big (but Steve Lieber caught it before I finished the colors!) There are a few little things here and there that are worth changing on the next one but I had a lot of fun. The color in particular really brought it together (I think.) 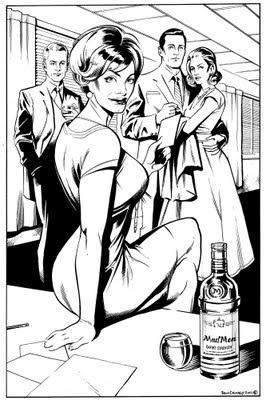 You can see patterns and gradients in the piece above and all of those were added digitally by me! I haven't really tried much of that before and I think it worked well this time. I love learning from my mistakes and modest advances on a piece like this.
Posted by SpiderBridge at 11:16 AM