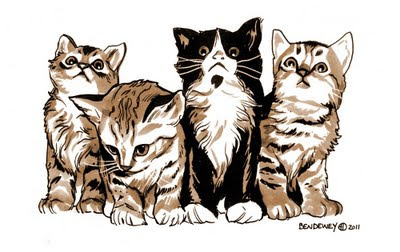 These Kitties were drawn for my friend Becky who is producing a zine about this troupe of adorable little scamps.
Periscope took a trip to the zoo (prompted by Natalie Nourigat) on Wednesday the 27th and it was great! I spent a whole day doing observational drawing. It was a success in both fun and output. Only a few animals presented real challenges; the penguins were tough and one turtle was fast enough (surprisingly) that he avoided a full portrait.

The giraffes were beautiful, The bats were smelly, the crocodile was amazing and stoic. My elephant drawings required some real time compositing. I felt a kinship with the chimps because they are so similar to us in all the most important ways; I owed it to them to portray them appropriately.

The sleepy animals were the easiest to draw. The sea lions were an amazing mash-up of the stay puft Marshmallow man, a jumbo jet and a dog. The penguins were very fast and yes, that is the real Iorek Byrnison.

This particular De Brazza's monkey was fascinated and angered by a raccoon that was taunting him outside his cage. At one point a man came up to me and asked "Do you ever just decide to give up and draw the butt?" I told him that I'm patient and I hope for multiple animals so that I can extrapolate. Though, that being said; it also depends on how interesting the butt in question may be.

I LOVE the Oregon Zoo!
Posted by SpiderBridge at 5:05 PM