I posted a piece of Harry Potter fan art on the Periscope Studio tumblr and some of the comments have indicated that I got a few crucial details wrong. I know there are some possible points of contention but I did think about the things that might be read as possible errors, at least a little, before I made the image. What follows is all meant in good fun (I want to get in on the nerdiness of being a fanboy too!) 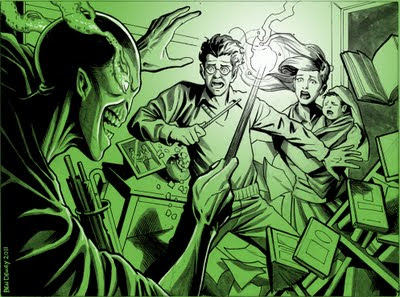 Godric's Hollow, Halloween Night, 1981
The first complaint I saw was that Voldemort didn't look as I've shown him at the time the Potters were attacked but Lindsey looked it up to try and confirm my initial conception that creating the Horcruxes deformed him:

Exhibit A
Exhibit B
Exhibit C

As for James having his wand it seems like I can be allowed a little creative license in that he is described as 'going for his discarded wand.' I like to think he could have picked it up for a second before he died or that it wouldn't have been that far from him because it was a dark time full of uncertainty and he'd need to be able to protect his nascent family. It certainly adds a little spark of drama to the image and for that, I hope I can be forgiven even if I'm not perfectly on target in the end.
Posted by SpiderBridge at 6:45 AM