I did this drawing of Lindsey with a handful of old oil pastels that I found in a box while cleaning/rearranging. It turned out OK, which is more than I can say for our breakfast. 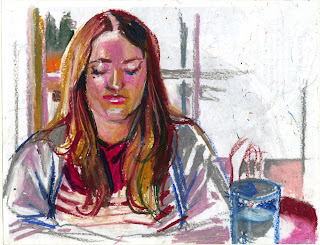 We went to a place on Hawthorne street that we had been talking about checking out and it was lame-sauce. I'm not picky either but if you strike out on taste, expense and portion then I can't pretend to like it. I try not to complain about things on the lighter third of the scale between 'I lost limbs and my vision via civil war and racial genocide' to 'this isn't the color tote-bag they usually give out at this kind of thing' with 'my pet died' somewhere around the middle. I have a good life and I think about that every day. That said; this Muffin I had was definitely closer to 'sorry champ... rocket got run over' than 'this free popcorn sucks.'

Why Go to Hawthorne for breakfast when you can go to Tom's? 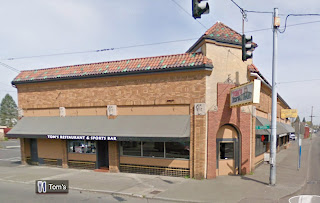 I like our Sunday breakfast adventures to far flung locales (of more than a block away) but I'm going to stick to Tom's for a while because the coffee is perfectly watery, the pancakes are cheap and plentiful and the waitresses all seem to have names from the 19th century.
Posted by SpiderBridge at 11:53 PM