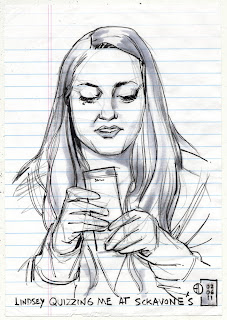 As I may have mentioned, Lindsey doesn't draw much voluntarily but somehow I got her to agree to produce images to go with her frequently staggered blog posts. We reinforce each other by performing complimentary and or equivalent tasks.

I have been trying to do an image of her at least once a week. Sunday is often my day for that little event and I decide after this last, particularly lazy Sunday, that I want to implement a similar goal for my long neglected board game design. I want other people to have the chance to play my sweet games and until I set time aside they just exist as rough prototypes.

Here's to a future full of productive Sundays!
Posted by SpiderBridge at 10:46 AM