Interior Art In A Hurry!

The record project that Josh Asked me to do had two parts. I had planned to make an image for the interior that was more in keeping with the cover. I constructed the whole image for the cover fom my head using reference as a guided for accuracy. The circumstance of my weekend caused a shift in the approach for the interior. 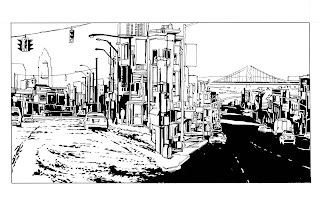 I had two major jobs for Adidas and for Darkhorse that absolutely had to be complete by Monday morning. I knew Josh needed his piece in the same time frame and that if I didn't find a way to make his image quickly it just wouldn't happen. I looked online and found pictures I liked of Cleveland and San Francisco. I picked starting images that I thought evoked each city and then I knit them together in photoshop-printed them out in blueline and inked over the bits I thought looked best.

Normally I think of that as a lazy approach and I suppose it would be if you had tons of time but I had next to none. I have found, in the business of professional illustration, that delivering on time is better than sticking vehemently to some aesthetic dogma. Experience is a great teacher and this weekend showed me how to be as efficient as possible.
Posted by SpiderBridge at 6:18 PM