You're Gonna Find Yourself Floating Home

I have a more elaborate Han Solo drawing on the back burner. This image was done as a tryout for a possible comics job where the request was to draw the characters more simply. There is a difference between getting a likeness of a fictional character played by an actor and just doing a drawing of the actor. With this image I tried for Han Solo rather than Harrison Ford. 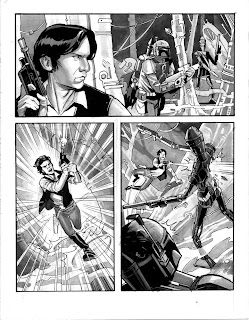 If you're a super 'original trilogy only' dork like me you'll note where the two bounty hunters, that are tracking Han, are from.

When I finish thepinup I will post that too. Both will be available on the Periscope Studio Etsy Store.
Posted by SpiderBridge at 3:48 PM