Hello all, I'm trying to catch up on my Dark Horse work so I'm not getting a lot of extra time to work on images for the Periscope Sketch Blog or this Blog but I have started a bunch of images that will be sweet once they are done. These partially completed works include: Mario Kart, Mad Men, Seven Samurai and Carl Sagan (which you can see in process in a previous blog.)

For the time being I'll offer you this great series of Science related things:

The fantastic Gem what-is NASA.
They just put a spacecraft into orbit around Mercury!
Tonight my old pal Rich Ellis invited me out to play a D & D encounter, with Grace Allison and Susan Tardif, at a game store here in Portland called Guardian Games. I had a lot of fun, but as you can imagine, public RPG sessions offer some serious potential for awkward clashes with the unwashed nerdy fringes. We shared a table with three dudes who took obnoxious, narcissistic dorkiness to a level I thought heretofore unreachable. 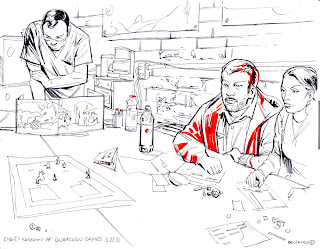 I did a drawing of Rich and Grace. Susan was sitting next to me so only her dice made it in to the picture. Our DM was a really nice, if somewhat meek, fellow named Dean. We fought an army of Ghosts. I ended up finishing off the main spectre with a magic missile.
Posted by SpiderBridge at 8:33 PM