Sketch Of The Week 1

If you read our COMICS then you will know that we introduced a character called Jaggard a long time ago. We are showing his armor for the first time in our Latest post and this presented a problem because, as of yesterday, I didn't know what it was going to look like. 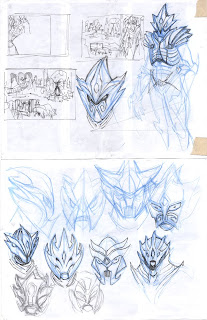 I wanted it to be iconic, not visually similar to Darth Vader or Sauron etc etc... yet evoke menace like they do, and make sense as a suit that someone could potentially manufacture and wear. I did a couple of doodles that you can see and I pretty much settled on the design that looked the smoothest (texturally.) I wanted his armor to be white and reflect like porcelain. This half of the post was mostly for the 'fans' or 'readers' (as I prefer to call them) of White Pony.

What I wanted to show was this little sketch from my anniversary with Lindsey. 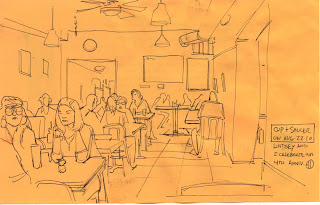 We went out to breakfast and I started a drawing of the cafe while she was in the bathroom. The girl with the bug eyes glasses had a vocal affectation like Mira Sorvino in "Romy and Michelle's High School Reunion." Her whole aesthetic seemed contrived like she was going to a 'I'm a Portland hipster' costume party. I had to draw her because she was such a 'perfect' example of what contemporary style is like in PDX.

I would like to post some sketch or another once a week and I'm open to suggestions. My next image planned for the blog is a colossus!
Posted by SpiderBridge at 6:17 PM