My favorite comic out there right now is a series written by Jeff Parker called Agents Of Atlas. It has everything you could want in a comic book; frequent monsters, well placed jokes, genuine mystery, nods toward science, martial arts, mythology, adventure, emotional peaks and valleys and mostly spectacular art.

The team is comprised of a resurrected Kung-Fu fighting special agent, a ancient Greek goddess in the body of a super model, an ass kicking Atlantean queen with an unknown past, a psionic super-scientist spaceman (complete with his own saucer), a killer robot with a human soul comparable aesthetic to that of a 57' Chevy and a munitions expert/battle savant magically trapped in the body of a talking gorilla. All of them work alongside an ancient sage-dragon who serves as their Consigliere and presides over their army. Did I mention that they also have a hidden city beneath San Francisco and can use a dragon scale to travel through sub-space tunnels? 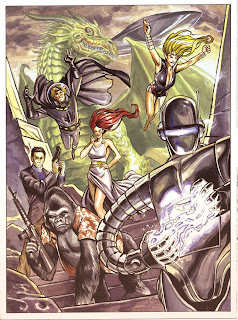 It doesn't get any better than that. The sad news is that people who buy comics don't always read comics or, in some cases, they may read them but have an agenda before they turn a single page: thus negating the radness within. This has resulted in less than stellar sales for my beloved AOA and their subsequent defeat by they only thing more powerful than their fabled abilities: the market.

I want to do my part and promote the book because it makes comics fun again, or more specifically, Jeff Parker makes comics fun again. Go to your local comics retailer and get all the Agents you can before the series ends. Tell your friends and remember a time when you could buy this great comic as it came out, before yet another middling wolverine title filled it's glorious shoes inadequately.
Posted by SpiderBridge at 7:33 AM