I've been enjoying the new season of G.O.T. so far and listening to the first book on tape, via audible, while I work. I had read the the first book in of 'a song of ice and fire' in 2010 and enjoyed it. When the show came out I was excited and pleased with how they adapted the first book; now I'm in the reverse position of seeing the second season without having read the second book. It's just the thrill I thought it would be; this time around I've been surprised. 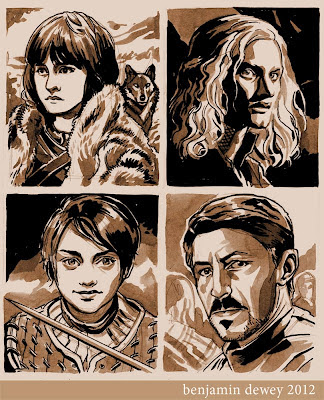 I thought it might be a fun little exercise in speed to draw the whole main cast of the first season on sketch-cards. It has been choosing and mashing references up. In some cases I find a great image and just go for it but I like to fuse disparate sources to make something new when I can; add a head to a body, put in a background element, equip them with new weapons or armor etc. 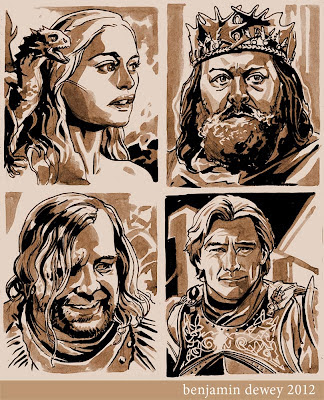 I should mention that I'm taking pre-stumptown commission orders too. I'd like to be able to have a few done before the show because I almost wasn't able to fit in the list I had at ECCC. I don't want to leave anyone hanging so contact me ASAP if you're interested. I'll be working on my upcoming Oni project and book proposal for Tragedyseries/TCBW. I hope your weekend will be full of sun and icecream.
Posted by SpiderBridge at 9:40 AM