I thought it might be fun to do a walk through of how I make my posts for the tumblr I started in recently. Hopefully this won't ruin your enjoyment (if you do enjoy them- I shouldn't assume) of the 'tragedy series.' It would be a shame to ruin it for you like when I found out that Rivendell is a bunch of foam and Christmas lights and now I can't stop seeing that. 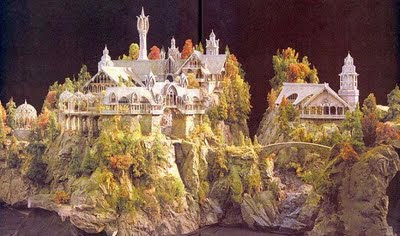 If you want to preserve your neutrality on their development and execution you should stop reading now!
Number 222 is a good example of how these little notions I get can become a thing I was proud and surprised that I made. First I try to think of a subject I haven't done yet that falls within the parameters I've set for myself (that I will spell out more clearly in a bit.) As I progress it gets a bit harder but generally it can prompt something unexpected, since I'm trying actively to avoid clear repetition. 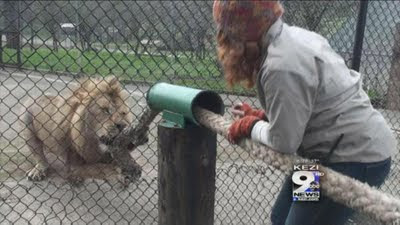 In this specific instance I had thought of a news story Lindsey and I saw while we were in Lincoln city, for our anniversary, about a safari park here in Oregon where they have lions that like to play tug of war. That image is enough in and of itself! once I have a self evidently odd or funny situation then I try and compound that comedy if possible. In this case I tried to imagine what sort of opponent would be funny. It occurred to me that a group of kids in a scout troop might do but they had to be capable or else it would be too close to something genuinely sad (the first of the tenents I try to uphold; No genuine tragedy) At that point I write it down to be addressed later.

I generally do a little drawing (like the image of #57 seen above) if I can't fully imagine it but in this case I had it pretty firmly in mind. It is at this point that I will do an image search to find good refrence that coincides with what I have sketched. I lucked out and found these two images:

Even though I had the elements of the final image, the phrasing wasn't quite there yet though and I went through several iterations of what would work best. I often ask Steve Lieber for advice; this questioning runs the gamut from 'should I buy a house?' to 'what sort of pen do you use to ink nostrils?' He is also a super funny guy who gets how to translate humor into drawings because he has studied it extensively for his own development so I go to him first for comedy.

I had written out a bit about 'ragamuffins' challenging a hungry lion to tug o' war but that seemed too plain. It struck me that a 'rematch' would be funny but it didn't quite fit yet. Steve said "Rematch is funnier if there is evidence of the previous encounter...make some of them amputees." I was hesitant to go there but the more I thought of it the more I realized that he was right about the necessity for notes from the first lion vs. kid showdown. I put a few shoes and scraps around the lion and Steve added the cherry on top the sundae by suggesting that I wrap the ragamuffins in bandages and give a few of them ragged clothes. He was so right! Once I did it the whole thing came together and I got this: 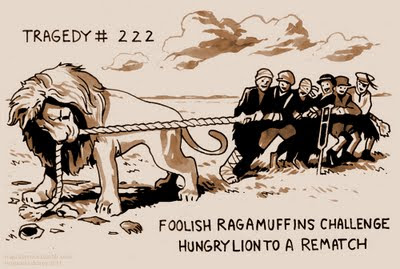 There you go. Thanks for sticking with me through that description. Also much gratitude to all of you out there who support my tumblr and read this blog. I am a lucky guy.
Posted by SpiderBridge at 7:00 AM