Aang And Friends (And Foes) 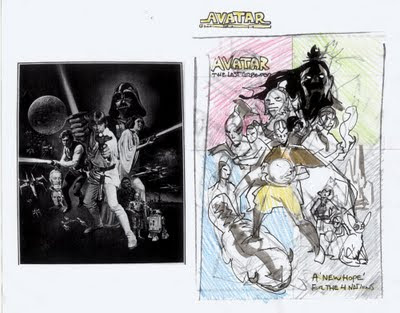 Periscope sketch challenge has been a great source of fun for the studio. Sometimes I step past fun into tedium because I try to take on more than I should. It didn't seem like it would be a hard thing to make a mash-up montage between Star Wars and Avatar but it ended up being a lot of work for a somewhat unexciting image. Not enough of either to make something more than the sum of its' parts. 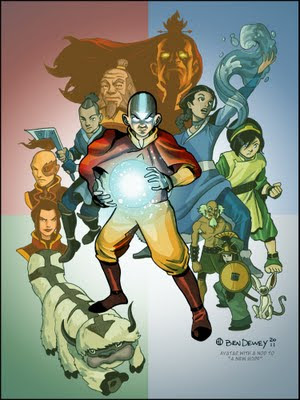 My original intent was to try and throw down a few characters and tip my hat to Luke and the gang in a way that was fun and fast. I used the same ink-wash technique that I used in my ninja turtles picture hoping for similar results. The trick to making a good illustration rather than an OK illustration is not to lose spontaneity or excitement. In this case I was too concerned with the aesthetic of Avatar and I didn't trust myself to make a wholly original composition. Oh well, You draw and you learn eh?
Posted by SpiderBridge at 3:50 PM