I like observational drawing. I feel like it is one of the things that I do well. I encourage developing artists to try it as often as possible. It becomes a reservoir that one can tap into as they develop cartooning solutions for the articulation of complex information. Without some understanding of natural light and forms that emerge from contrast, the methods of stylization that people often employ quickly reveal themselves to be incomplete. 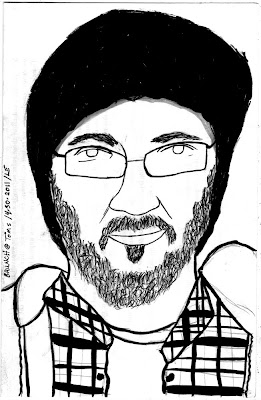 I got Lindsey to draw me and she did a better job of honestly recording what she saw than many people I went to art school with would have. 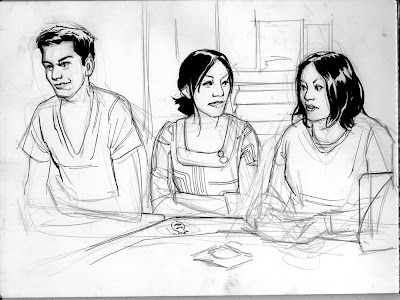 Some friends of ours were in town over the weekend. I often draw people that I'm having a meal with but I've decided it might be best to ask first. The fellow on the left of the image (a dear friend of mine) was annoyed with my depiction of him to the point where he asked me 'not to do it again.' That is a possible peril when you portray anyone I suppose.
Lindsey and I had a nice breakfast at Tom's where we talked about drawing. I asserted that adults seem squeamish about drawing because they appear to have a strange standard of necessary quality that is self applied. Many people don't hold themselves to a similar litmus test with other popular activities like sports or cooking, that have a well demonstrated, professional, archetype against which their own skills could be measured. If they do, the peak potential ideal doesn't seem to stop most of them from enjoying their own explorations. Drawing is fun and I'm glad when Lindsey does it. 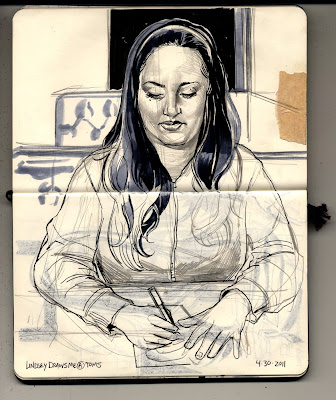 Lindsey is depicted here depicting me. The drawing she is working on can be seen above
Posted by SpiderBridge at 6:20 PM