I've been swamped with my Star Wars project for a long time now and I have not had much in the way of free hours. Still, what little time there was manifested a few lady-specific sketches: I do make a point to draw Lindsey as much as I can, I was commissioned to do a portrait of an ailing but brave girl fighting a brain tumor and, finally, I happened to have a 20 minute period where I put way too much effort into a little wonder woman doodle. 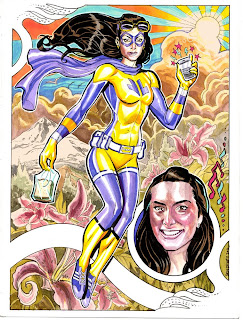 I like to draw women but there is a fine line to walk between being playful in exploring what you find attractive or enticing and being a total perv. I've come to a point where I'm just going to draw what I like measured against the context I'm working in; trying to find that balance.

I was talking with Periscope's current Intern Ainsely Yeager, about what gains a person success in the field of comics, and I said something along the lines of 'if you don't have boobs you should learn to draw them' to which she replied with a more concise "(to succeed in comics) you better be a hot chick or know how to draw them." It's true that being an attractive girl can go a long way in endearing your work to comics readers. 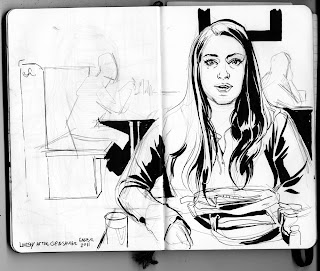 It has occurred to me that, since I like science, it might be a worthwhile thing to try an experiment along these lines. Will more people take an interest in my work and promote me if I spend the next month drawing hot ladies and popular subjects rather than my usual fare? The question really boils down to whether people are more interested (generally) in subject rather than approach. I suppose there is a balance to be struck between drawing weird niche images that satisfy me and the things that please people. 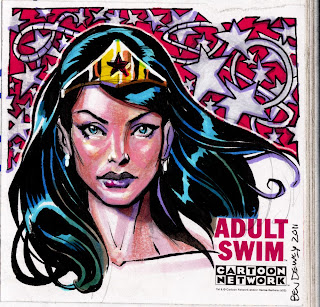