Right now Periscope Studio is very busy working on a big commercial gig that I have a substantial part in, I'm doing backgrounds on Justice League 'Retro' and trying to produce some Marvel samples. I don't mind the juggling but I sometimes feel like I lose track of things that I promise myself I'll finish "when I have time." Here are a few recent drawings I've done outside my professional obligations.

I was walking down the street with Lindsey a few weeks ago and a guy walking towards us raised his hand in the air and shouted "Green Lantern!" As he passed us it occurred to me that I was wearing my (now ten year old) G.L. hoodie. We high fived and as he continued on his way he added "...only black super hero!" It was a nice little nerd-bonding moment between strangers. 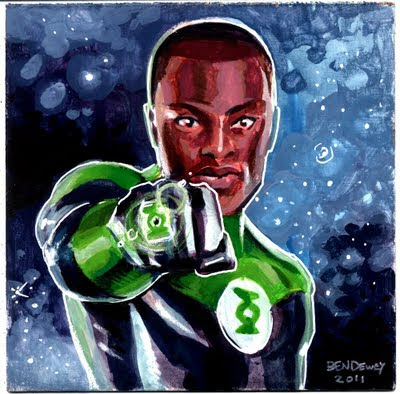 John Stewart is a fun character to draw. With the movie coming out, focused on Hal Jordan, I thought I might reiterate his place in the pantheon of the Green Lantern Corps. This gouache painting is 6 X 6 inches.
Buy it from the Periscope Etsy Store while you can!
When I sketch I tend to keep it pretty loose. I don't like the idea of a sketchbook that exists as a strut. I believe it is a place for a person to work out ideas. I did a new banner for this blog, improving on my initial sketch, and I wanted to work out the robots that would accompany Lindsey: 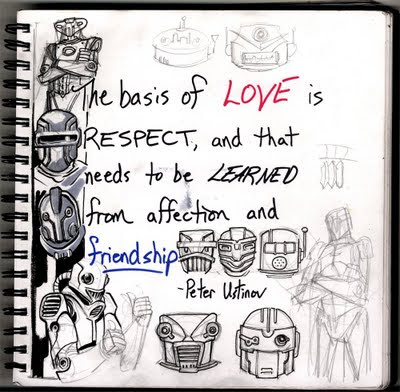 Lindsey got me a sketchbook and filled it with quotes that she liked. She's embarrassed by it by I like it.
Speaking of Lindsey, here is yet another sketch of her at our (or mine at least) favorite breakfast spot. I didn't get her likeness but I think it's worth posting my failures too. 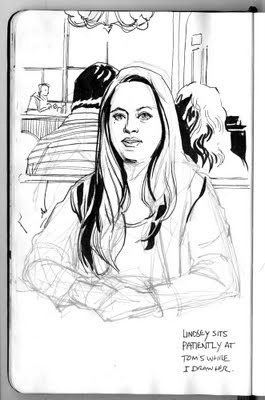 She was moving around a lot and our food came super quick so this one has some issues but I still like it.
I'll be returning to old projects, starting new ones and reinventing my web presence this summer. This new blog format and name are just one piece in that larger puzzle of advancing my artistic and commercial appeal. I'm having a lot of fun so far taking on that challenge. Many exciting developments are on the horizon so come back and visit soon!
Posted by SpiderBridge at 6:05 PM